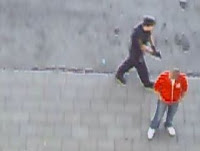 I remember as a young boy a different form of policing. The local policeman cycled round the village on an old sit up and beg bicycle, with his cape fastened on his handlebars. He never even carried his truncheon in the special inside pocket in his trousers. He had time for everybody knew everybody and had the finger on the pulse of the village. I don't think he even arrested anybody, a quick word into the ear of any offender or potential offender was enough to stop any budding crime.

My Dad said to me one day “ The policeman said he saw you stealing apples out an orchard yesterday is that true?” and so ended my budding criminal carrier. How could he have seen me, he couldn't have done, I had seen him riding out of the village minutes before. It was only later when I used to drink with that good and decent human being in his main office, the local pub, that I worked out how the system worked. Somebody would walk into the bar, get his attention, and the pair of them would disappear into the corridor for a bit of privacy. He would be back in a few minutes and the conversation would be taken up where it left off. Perhaps later somebody else would walk in and join us and he would quiet casually say, can I have a word with you in private and off they would wander. Here was the main hub of his communications. Somebody had seen me climbing over Grundy Graham's orchard fence, reported me to the policeman, who after appraising the situation decided the best course of action, would be to have a quiet word in my Dad's ear the next time he saw him. The result was that crime was virtually non existent.

Now of cause the population is not so homogeneous, with non of our shared values, and the police have retreated from the streets into there ivory towers, where they seem to do nothing more than collect statistics, organize public relations campaigns, and try and carry out the edicts passed down by the petty fuhrers in the Home office. I think now only one in 40 policemen are available for street patrol. Is it any wonder that crime is exploding.

I visited the village of my youth a couple of years ago when I was last in England. I was talking to our local vicar when the patrol car arrived to take her statement about a burglary in the church. It had taken them two hours to answer the call. They were decent hard working coppers, but I got the surprise of my life when they got out of the police car. They were wearing utility belts that would have put Batman to shame, American style night sticks and Handcuffs prominently on display, and I don't know what else. I rather impertinently asked one of the coppers if with all that equipment at there disposable couldn't Scottie have just beamed them down. He smiled and said he wished he could have done, but there was only a couple of patrol cars in this rural area to look after about 30 villages, two hours delay wasn't such a bad delay after all.

What has this to do with this photo of a Swedish policeman on patrol, well everything really. It seems that all the law enforcement agencies in all of the western countries have retreated from enforcing the law and protecting the citizen and his rights, to protecting there own rights. It is a sad reflection on our society, when a policeman has to draw his gun when on patrol, and it is only one step down from firing it, and two steps down from the military taking over his job. If action is not taken, and taken quickly the future looks black for my children and grandchildren