My Dad and Fishing. 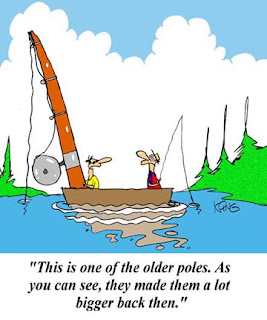 I was thinking of my Dad the other day. I think the only real person I have grieved over and then not very long. I had said all I had to say too him long before his death. I had no regrets. I spoke to him on the phone the night before he died, he was well into his 80s and was recovering from a stomach cancer operation. He died from a massive heart attack the following day. He was a tough old bugger, he had an operation for cancer of the throat 20 years before, a couple of minor heart attacks and had nursed my mother through the many years of Parkinson's disease and her decent into senility.

I wont say that his death was unexpected it wasn't, it was just that I had not expected it then. When I talked too him on the phone we had talked about him coming over to see us and stay with my family in Holland. He reasoned that he would be fit and well enough to take the plane in a couple of weeks. I was looking forward to seeing him and so was my son who always referred to him as Granddad England. I think that my first reaction when my brother phoned the following day to tell me that “t'ld lad” had died in the night, was shit why couldn't he have waited a few more weeks, a very selfish reaction, but he would have understood why. Then I started crying and in a few minutes it was all over. The hardest part was telling my son that Granddad England would not be coming to see him and would never be coming to see him. I think doing that made me realize that not only him but myself would never see him again. That I think was the end of my real grieving process.

I think that what got me thinking about my Dad was when I was moving his beautiful split cane fishing rod, to do some cleaning. I had wanted to do some fishing, I think I was about 10, I asked him if I could borrow his rod. “Nay lad, but I'll mek thee one”. was his reply. True to his word he did, and very professional one it was. It was not long after the war and he went to the local army and navy store and bought a 7 foot whip aerial for a few coppers from the fishing shop he bought me a cheap reel, line, float, weights and hooks and a set of eyes for lashing on the aerial, plus a couple of ferrels for holding on the reel. It took him about a week and I watched him lash the eyes to the aerial and varnish it cut a piece off the end of an old broom stick sand it down and smooth it he drilled a hole in one end and fixed in the aerial, a coat of linseed oil made the wood shine and a coat of varnish sealed it. It was a dam good rod. I have bought other rods over the years, but they never felt the same. He showed me how to tie on the floats and the hooks and made a hook disgorger out of a nail.

My first fishing expedition was on a Saturday morning, I remember that well. The best time for fishing is always in the morning he told me. We got everything ready the night before and he got me up at six o'clock to see me off. I carried my supplies in an old khaki gas mask satchel, a bottle of cold tea, sandwiches wrapped up in newspaper, worms in a jam jar, fishing tackle in a tin box, and a bone for my dog who went everywhere with me. He was right you know, early morning is the best time to go fishing. I don't think that I was ever a born fisherman, but I certainly was born to go fishing. I was never really bothered if I caught anything, but I certainly enjoyed those early morning fishing trips. Watching the watery sun coming up and driving the mist off the top of the pool listening to the dawn chorus or the booming note of the Bittern that seems to come from everywhere at once. I had a favorite spot tucked in under the bank of the pool. I later took Binoculars with me and I saw over the years most of what English wild life has to offer. Badgers stoats weasels foxes and I can name at a glance most birds. I never caught many fish. I think in all the year I went fishing I never caught one over a pound. I can still see him waving me off in the breaking dawn and going back into the house to catch a few more hours sleep. Thank you Dad.

Good stuff. Keep it up.

The older I get, the more I've learned to appreciate the old school upbringing I got from my Dad. Of course you have to rebel when you're young, but eventually you learn to value the time you spent with your Dad and the things you did together.

Reflecting on your post below, I wonder what these Arab sheiks teach their kids. I mean I don't know whether they do spend any quality time with their kids. But judging by what this Imaam said, I guess them Arabs don't do much fishing. Or maybe they do, but they probably don't teach their sons how to build a fishing rod. Or how to fix an engine. Or how to build one.

And then you can just imagine a society where most kids don't even know who their father is. Not to mention having no friendly neighborhood coppers around.

It all does make a difference.