Add to My Profile | More Videos
Posted by Yorkshireminer at 19:44 2 comments:

The Danes have always been a civilized people. They are great believers in free speech, and they have always been in the fore front when it comes to defending human rights. They are easy people to get to know and have more than there fair share of common sense. They are laid back, slow to anger, people think that they have lost there viking fighting ability, nothing could be farther from the truth. During the 150 year history of the Victoria Cross 15 have been won by foreigners. Three of these were won by Danes. A piece of good advice from someone who knows the Danes well, DON'T PISS THEM OFF. Some people never learn, a couple of years ago a traitorous Imam went to the middle east to stir up trouble with a set of innocuous cartoons and some self made ones just to stoke the fires of Islamic hatred against the Danes. This stirred up some patriotic Danes to get something done, they had simple had enough. Anders Gravers and a few others decided to fight back so they formed a political party called S.I.A.D. Which stands for (STOP THE ISLAMISATION OF DENMARK). Their style is confrontational, they say it as they see it. They don't mince words, and they will not be intimidated. There attitude is a breath of fresh air in the dimmi west. There are now 2,000 in the party and I would not be surprise to see a few in the Danish parliament after the next election. Certain thugs in Denmark thought that it would be fun to rough them up frighten them. I have met Anders, I like him, he is as decent a Dane as you will ever meet. This attempt on his life will only make him more determined along with the rest of the party. Below is the report from S.I.O.E. Read it and find out what happened

Sunday the 21th October was there not only a severe attack on freedom of speech but an attempt to close the mouth forever on an organization who stands up for freedom, freedom of speech and for democracy. Small details were the reason why it didn’t ended up with murder like in Holland, on one of the brave advocate's for freedom of expression who dare to stand in the front line.
On Sunday the 21th October SIOE Denmark had announced a demonstration in Copenhagen. Read previous post. Before the demo Anders Gravers (SIOE and SIAD) and 2 other members were driving in a van with three seats in the front, following the security car, where an elderly woman, 74 years, and member of SIAD and another SIAD member were passengers.
Anders was driving and followed the security car down in a parking cellar to park so the cars would be in a secure place before the demo.
He drove very slowly down because apparently there was very little space in the hight for the van. The driveway is very steep and is divided by concrete pillars. Because of the delaying, the driver of the security car got out of his car to open the metal gate again because it was closing after 30 seconds. so we could enter the cellar. He directed the van forwards close along the pillars and directly in front of a big concrete pillar supporting the cellar roof.
2-5 seconds. after there was a loud bang and the front window was damaged. About two autonomous looking types were in the front and two on each sides smashing the site windows shouting Get him out get him out! and started hitting Anders and the SIAD passenger in the other site with iron bars. The SIAD member was hit by a soda bottle on the back of her head.
Anders succeeded after a while to kick one of the autonomous hard in the face as he leaned in to unlock the door. Anders managed to get out with a fire extinguisher from the van and hit another one hard on the shoulder. It remained later that they attempted to stab him down when there was found cut holes in the shirt, jacket and vest. Anders was wearing his security vest which saved his life.
Suddenly they disappeared and Anders got around the van and saw a SIAD member lying on the floor where he was being beaten on the head by 4-5 persons with iron bars. Apparently they also tried to stab him , but again he also wore his security vest which saved his life.
Suddenly someone screamed RUN RUN and they disappeared up the steep driveway. The elderly woman was lying on the floor completely still. She had been in the security car and got out immediately when the driver shouted OUT OUT. She didn’t know what to do and started running. She was hunted down by two persons and struck down with an iron bar. She lay completely still in the hope she wouldn’t get anymore. She felt they stood a moment watching her to see if she would move. Then they presumably ran to the other SIAD member on the floor and joined the attack on him.
It was impossible to call the police in the cellar because of bad connection. But fortunately the caretaker of the building came down straight after by a coincidence and alarmed the police and ambulances.
The wounded, 2 men and 2 women decided that the best thing Anders could do was to complete the demonstration. That would be a slap in the face on the undemocratic and fascistic forces who have tried to shut us down forever. Anders agreed, apart from bruises on arm and body he felt alright and after talking to the police he drove away and completed the demonstration in front of the Institute of human rights.

Posted by Yorkshireminer at 12:08 2 comments:

Before you click on this video, I would like to say something that I think is rather important. Cultural relativism sucks. What ever choice you make when you judge anything always comes down to what is better or what is worse. Cultural relativism is when you don't make a choice, because you do not want to offend. When you do that, you are being dishonest and an hypocrite. I am somewhat simplistic in my attitude, when it comes down to culture. Islamic culture to me has always been inferior, not because it does not have great body of work, but apart from calligraphy, it lacks great music and the visual arts. Art is about emotions, some artists effect you personally, and not others, but really great artists affects nearly all of us. Some can move us to tears, tears of pleasure. That is the difference between Western and Islamic culture. In western culture you can cry from pleasure, in islamic culture you will only cry from pain. Please enjoy and don't be ashamed if you wipe a tear from you eye.

A Walk in the Park 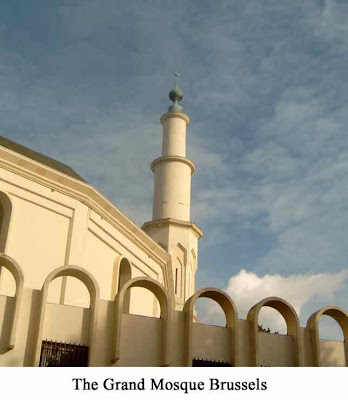 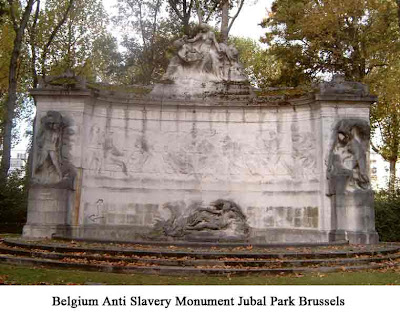 The last few days I have spent in Brussels attending a conference organized by the Vigilant Freedom Europa. I suppose we will be called right wing fascists by the left because it was about the danger of Islam in Europe. The conference was held in the Belly of the Beast, the E.U. parliament building. I was mildly surprised, the E.U. catering served us ham sandwiches among other things in the intervals between the speakers. During the time I was there I stayed with a Danish friend and another Danish Blogger. On the second day of the conference. I walked down through Jubel park to Robert Shumans plads to get a Taxi to the venue. Just a few yards away is the European Commision building. What caught my eye though was a minaret sticking up above the trees just to the left of the park entrance, curiosity got the better of me and I wandered across to take a closer look. The mosque turned out to be the Grand Mosque of Brussels built with Saudi money on land given to the Belgium muslims by the late King. It is no more than about 200 yards from the E.U. Commission building. I took a picture and then wandered back towards to main gate to get my Taxi. To get there I had to go past this monument. Late 19th century. It must have been very impressive in its day, but the past 100 years have ravaged it as you can see it is black and eroded. One would have thought that the Belgium people would have would have taken care of it because it is about ending the slave trade in the Congo. I didn't know this until I wandered over to read the inscriptions. Well the part of the inscription that I could read because certain vandals in Belgium society had vandalized it, it is not difficult to see why Here is my rough and ready the translation to my readers who can't read Flemish or French. The Belgium's military heroism in destroying the Arab Slave traders. Well you can't read the bit where it says arab in the French inscription because someone has taken a chisel and chiseled it away, but you can decipher it in the Flemish inscription. You can also see that it has happened before because both words have been repaired. It seemed symbolic to me about the problems we are suffering in Europe today. We allow them to build propaganda offices under the guise of mosques, then do nothing when they try to eradicate our history by disfiguring our monument. The monument is certainly not on a par with the Giant Buddha statues in Afghanistan, but you can bet your life it will be the first thing they blow up when they take power. History might not repeat itself but it certainly tends to rhyme.
Posted by Yorkshireminer at 18:57 5 comments:


I don't know if this is a tongue in the cheek send up. Perhaps some American reader could enlighten me
Posted by Yorkshireminer at 15:25 5 comments: