An al-Qaeda convict has won a reduction in his prison term. Dhiren Barot had been jailed for up to 40 years for a dirty bomb plot after he admitted conspiracy to murder.

The Court of Appeal, headed by Lord Chief Justice Lord Phillips, reduced the sentence to 30 years. They said that the 40 year sentence was for a terrorist who planned murder by a "viable" means. The plot by Barot did not amount to an actual attempt and it was not certain whether his plots would have succeeded and what the consequences of them might have been.

Barot had admitted to planning attacks in Britain and the US, using limousines packed with explosives and a radioactive dirty bomb. The appeal judges said that the limousine plan was "amateurish".

Sometimes I just feel like giving up. These judges have had there brains pickled by drinking too much port. For me they have lost the thread. Surely the intent to commit the deed is more important than the ability to commit the deed. Whether it was professional or Amateur is immaterial if he had had the chance he would have done it. One of the plus points for capital punishment is when it is carried out, appeals like this, tend to be somewhat irrelevant.
Posted by Yorkshireminer at 12:35 1 comment:

The Counter Crusade in Europe 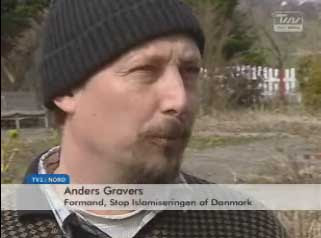 S.I.A.D. (STOP THE ISLAMISATION OF DENMARK PARTY) have now started to collect money to start a court case again those parts of the koran that contravene the Danish Constitution.

The Minster of Justice is breaking the Constitution of the Kingdom of
Denmark Act. (the Danish constitution). We shall now take legal action.

We have now started a collection of money in the whole world in order to take legal action against passages of the Koran, i.e. passages which are contrary to the Danish constitution and the Danish Penal Code.

Having received a refusal of our claim from the Ministry of Justice and having noted that the case worker acted on complete ignorance, as she had not even read the Koran and as she did not know the meaning of the word “hadith”, SIAD forwarded a second claim.

But again we received a short reply from some Jens-Christian Bülow from the Ministry of Justice with the following wording:

By e-mail of March 27, 2007 you have again addressed the Ministry of Justice in order to have passages of the Koran prohibited in Denmark.

The Ministry of Justice refers to an earlier reply of March 7, 2007. Yours faithfully, Jens-Christian Bülow.

Again we see a total negligence of our arguments which are based on the very clearly stated sections of the Danish constitution. We have now opened a bank account where money received on this account will be ear-marked for the trial.

S.I.A.D. Was started by group of ordinary Danes who had had enough with all the shit that was heaped on them over the Cartoon crisis and decided to fight. They are still a small organization. They do not hid behind Aliases the way we do here Anders Gravers real name is Anders Gravers, his photo is to be seen on the Blogg. They are starting a counter crusade to defend there land. Denmark has a population approximately half the size of New York. The Muslim hoards went for them because they thought that they were an easy victim, how wrong they were now the victim is hitting back. Denmark has fallen once again below the worlds political radar and very little that comes out of Denmark makes news. Did you know that of the two Muslim clerics that started the crisis one is dead and the other one left Denmark complaining bitterly how misunderstood he was by the Danes. No the Danes didn't misunderstand him, he misunderstood the Danes. I know the Danes, and I can assure you if this Crisis had happened 1,000 years ago it would have been over in a few days. Unfortunately it cannot be solved in the good old Viking way. S.I.A.D. Works within in the law and are committed to observing the rule of law only they don't fudge the issue in there case it is Danish Law not Sharia law. They are going for the Islamic Jugular, they see it as a win win situation. If they win muslims in Denmark would have to reassess there attitude to religion and state. It might even give our political Dimmis a bit more Backbone when they realize that if little Denmark can stop Islam in its track perhaps we can do the same. If they lose they also win as this case will get lots of coverage in the media and the pissed off Danes will get a very effective lesson in what is in store for them if islam gets its way. They deserve our support so if you have the odd dollar or Euro to spare after paying the exorbitant petrol prices to pay for the jihad please send it. They will need a lot of money, we all know how greedy lawyers are. If you have a Blogg please post this comment on your Blogg we must spread the word as wide as possible . It would be also very nice if Robert or Hugh would write an article here on Jihad Watch or Dimmi Watch. I will include the E-mail address of S.I.A.D. At the end of this post plus and the links to there blogg both the English section and the Danish section to show that this is not a Con trick. Enjoy the English section they do not mince their words and don't forget to leave a comment. If you can't send them money then please send a message of support they are a small number of Danes who have stuck their neck out to defend us all, they have no police protection. Remember if Europe goes America is in the front line. I am not saying that you are not already, but the Danes are one of your most faithful Allies, they are fighting now side by side with American Soldier in Iraqi and Afghanistan and like you, their sons are also dieing.

Here is the link to the English section of the Blogg

Here is the link to the Danish section of the blogg

Here is the E-mail address

Posted by Yorkshireminer at 22:39 6 comments:

my Uncle and his Parrot

My Uncle had a parrot, he called it Pecky. When my uncle came back from the steel works where he worked, he would eat his meal, sit down in the armchair and teach Pecky long soliloquies from Shakespeare. The parrot was good he could quote long passages word perfect. The steel works eventually closed and my uncle took early retirement. My uncle was a really skilled man, brought up from his youth tending open hearth furnaces he could judge the temperature by eye to within a couple of degrees. All these hard learned skill of the craftsman went for nothing when the powers that be decided that the works were uneconomic, (unprofitable). Thousand were put out to graze tend their gardens walk there dogs and generally get under the wife's feet. He died many years ago. It is a pity he died for his skills are coming back and would certainly be useful in this present day world. He would have made a perfect teacher at one of the Madrases that are now springing up in England, for he could certainly teach Parrots.