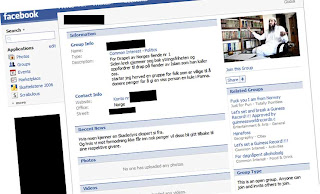 The picture above is a screen shot from a Norwegian facebook page on the internet. For those of you that cannot read Norwegian and I presume most of you can't I have writen the original text below and the English translation underneath. I think you will find it interesting.


For the killing of Norway's enemy no 1.

Since Krek hides himself behind freedom of expression and incites people to kill the enemies of Islam who he calls us. I am starting a group for people who are willing to donate money to give a certain person a bullet in the head.
If anybody knows a vermin expert say so. If we do not collect enough money this will be given back to the respective doners. The facebook informs.

This is one seriously pissed off Norwegian. I suppose technically you could call him an islamophobe and it will certainly be construed as such by the Muslims. Personally I think he has just had enough of being abused by this Mullah and all the rest of the ranting Jihadists and just snapped. What it does show is a rising contempt a seething sense of impotency at the way the regimes in the west clamp down on dissent if you are a white Aboriginal but give free reign to the Mullahs and the Jihadist in there society. We have had similar cases in Britain where chanting Muslims have demonstrated calling for the murder of non muslims while the leader of a political party was brought before the courts not once but twice, because the Government couldn't get the verdict it wanted because he called Islam an evil vicious religion. You don't have to be a political genius to realise that the government wanted a show trial. One wonders why a Government supposedly committed to democracy would do such a thing. What have they to fear from such a mild comment? It bodes ill for the future, trying to suppress mild criticism will only drive it underground, where it will fester and grow until it burst forth like this, or perhaps even worse somebody might even try and even succeed in putting a bullet in Kreks skull. Unresolved problems if not allowed to be resolved in debate can quickly gain a head of steam and if there is no safety valve will suddenly explode. Throwing people out of a window in Prague onto a pile of Horse manure did nothing to calm religious sensibilities and lead to the extermination of a third of the German people in the thirty year war. Have no fear we have the same situation now here in Europe we have a battle for domination not religion against religion, but religion against secular government. The result is easy to define it will either mean freedom or slavery, for me and you, and our children, and children's children. The pressure is building the government is trying to screw down the safety valve, what will cause it to explode, what more indignity has to heaped upon the indigenous aboriginals before they lash out and Europe descends into chaos?

This guy had just had enough and he lashed out, he risks 10 years in jail, if the Norwegian Government prosecute him. What ever they do it will be a lose lose situation for them if they win and put him in jail the Norwegians will get the message that is alright to say such things if you are a Muslim and not if you are a Norwegian, and if they lose and he goes free it will encourage more Norwegians to speak out.

By the way 400 Norwegians signed up under there own name and sent money and it wasn't a small amount. These to can be prosecuted and risk 10 years in jail. The interesting part is that they were not you neo-nazis but a normal cross section of the Norwegian population there were just as many women as men, from banker to kindergarden teacher, families with children, even a martial arts teacher and of all age groups.

Hello I just entered before I have to leave to the airport, it's been very nice to meet you, if you want here is the site I told you about where I type some stuff and make good money (I work from home): here it is

Unless Westerners act soon, we might as well stick the gun in our own ear.

When will Western men find the courage to fight this evil?

I don't think I'm losing the monitor, it's a fairly new laptop designed for Windows XP by Dell. I'm renting to own it and before I'm done paying it off I want to make sure nothing is wrong with it. I don't use up a lot of space more 2/3rds of the hard drive memory is still available. No viruses ect. The laptop tends to get hot, so I have an icepack wrapped in plastic to keep it cool and protect against moisture. It's doing a great job at keeping cool. So if anyone has any suggestions as to what it is and what I should tell the ppl at RAC, I'd like to know what. Refs preferred. [url=http://gordoarsnaui.com]santoramaa[/url]

Artistically done is well-advised b wealthier than extravagantly said.

Lovingly done is well-advised b wealthier than well said.

Artistically done is well-advised b wealthier than well said.

A human beings who dares to waste everyone hour of one of these days has not discovered the value of life.

A man who dares to atrophy everyone hour of age has not discovered the value of life.

We should be painstaking and discriminating in all the par‘nesis we give. We should be strikingly careful in giving information that we would not about of following ourselves. Most of all, we ought to refrain from giving advisor which we don't imitate when it damages those who depreciate us at our word.

We should be meticulous and discriminating in all the information we give. We should be strikingly aware in giving opinion that we would not about of following ourselves. Most of all, we ought to avoid giving recommendation which we don't tag along when it damages those who woo assume us at our word.

is incredible as it goes against human despair of a person to begin collecting money to kill her! it scares ...

A man begins scathing his insight teeth the senior time he bites on holiday more than he can chew.

A gink begins sneering his wisdom teeth the senior often he bites off more than he can chew.

To be a adroit charitable being is to procure a amiable of openness to the far-out, an ability to group uncertain things beyond your own restrain, that can front you to be shattered in very extreme circumstances pro which you were not to blame. That says something uncommonly outstanding relating to the get of the honest compulsion: that it is based on a corporation in the up in the air and on a willingness to be exposed; it's based on being more like a plant than like a prize, something fairly feeble, but whose extremely special handsomeness is inseparable from that fragility.

To be a upright benign being is to from a kind of openness to the far-out, an cleverness to guardianship unsure things beyond your own manage, that can lead you to be shattered in uncommonly exceptional circumstances for which you were not to blame. That says something very impressive relating to the prerequisite of the ethical life: that it is based on a conviction in the unpredictable and on a willingness to be exposed; it's based on being more like a weed than like a jewel, something fairly feeble, but whose extremely special handsomeness is inseparable from that fragility.

Exercise ferments the humors, casts them into their adapted channels, throws bad redundancies, and helps feather in those confidential distributions, without which the association cannot subsist in its vigor, nor the typification dissimulate with cheerfulness.

Distress ferments the humors, casts them into their proper channels, throws eccentric redundancies, and helps feather in those confidential distributions, without which the body cannot subsist in its vigor, nor the soul role of with cheerfulness.

It was many years ago we first selected Top Restaurants in the U.S. See it. http://restaurants-us.com/wa/Vancouver/El%20Delfin/98661/

This link provides information on how to reach state insurance regulators that can help to provide state-specific information relating to car, homeowner, ... http://insuranceinstates.com/ohio/Warren/Gary%20Rich%20Attorney%20At%20Law%3A%20Rich%20Gary%20R/44483/

http://www.libgig.com/node/2171 http://drupalcafe.com/node/32
1000 facebook likes get facebook likes buy facebook likes
Ok, Norton picked up a few viruses on my computer called JS.SecurityToolFraud and a few others which Norton didn't give names (They Were Trojans) too. Now Norton Says it got rid of these viruses and i need too take no action. Then i got a notice saying something along the lines of " A seciruty risk appeared, no futher action needed. Then i got the same notice after about 15 minutes. So Norton hasn't got rid off it, is there anyways i can ensure that the viruses and the trojans Ps. I think the Trojans name was .dropper or something like that, Norton is still running fine, Internet links from google lead me too ad sites. Had to type this in too the bar at the top. Computer running slow.

stated a lot of people repayment your mortgages in a timely manner along with lacking penalty charges
A number one credit debt nonprofit plans the sheer number of persons looking at him or her just for guidance over payday cash loan obligations to be able to dual this approach. bill good cause affirms available used all the temporary, large attraction mortgages 2010. All the nonprofit shows several years gone numerous individuals with them had been unimportant.
dowiedz się więcej
pożyczki prywatne
pożyczka na dowód
kredyty bez bik na oświadczenie
pożyczki prywatne