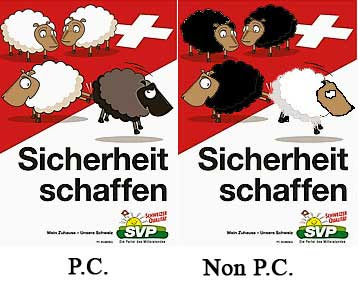 A certain Gentleman of the negroid persuasion Doudou Diène has been complaining, or to be more correctly whining about how Islamaphobic the Swiss have become. It seems that the U.N. Human rights commision is a bit peeved over a poster the Swiss peoples party has issued showing three obviously Islamophobic swiss sheep kicking out a black sheep out of Switzerland. The U.N. Human rights commision or what ever name they use, tends to be somewhat over sensitive when Islamic human rights are concerned. But markedly reticent when any non-muslim rights are contravened. This of cause is to be expected when you have representatives from 15 muslim nations on the committee, non of which are noted for there respect of Human rights, certainly not womens. This arrant hypocrisy tends to get up my nose, but to show my good will, I have doctored the poster to make it more politically acceptable to these idiots. I can assure you if the poster I have changed had been issued by the Swiss peoples party there would not have been as much as a squeak out of these morons. I am doing this to make a point. In the mean time the Swiss government will dissimulate, as only they can. In the mean time back in the Alpine pastures the Heides and modern day William Tells learn how to make computer games and post them on the net, and get ready to defend there land. If only these fools from the U.N. had half a brain they would realize that they are doing nothing to help there cause by whining over Islamophobia, a recently hatched word that has no meaning what soever. To be islamophobic means that you have an irrational fear of Islam, any fear of Islam is by definition rational. The Swiss being one of the most rational groups of people obviously realize this and are getting things in place to defend themselves. If the Swiss suffer from any phobia then it must be Antikuffaphobia an irrational fear of wanting to defend yourself. You have to be able to understand a bit of German to understand the link below please enjoy and join the Swiss in raising a middle finger in the direction of this Idiot and his paymasters.

Fun and games in the Swiss mountains
Posted by Yorkshireminer at 12:06

Hi miner, the link is up I fnally got around to doing it sorry for the delay

If a group of people say they want to kill you, and you notice that they seem to be making an earnest attempt to do just that, why are you phobic for noticing? There should be another word for NOT noticing or caring. Islamablind or Islamadeaf or something.
I worry about their recruiting practices: http://lifepundit.typepad.com/my_weblog/2007/10/islamic-post.html